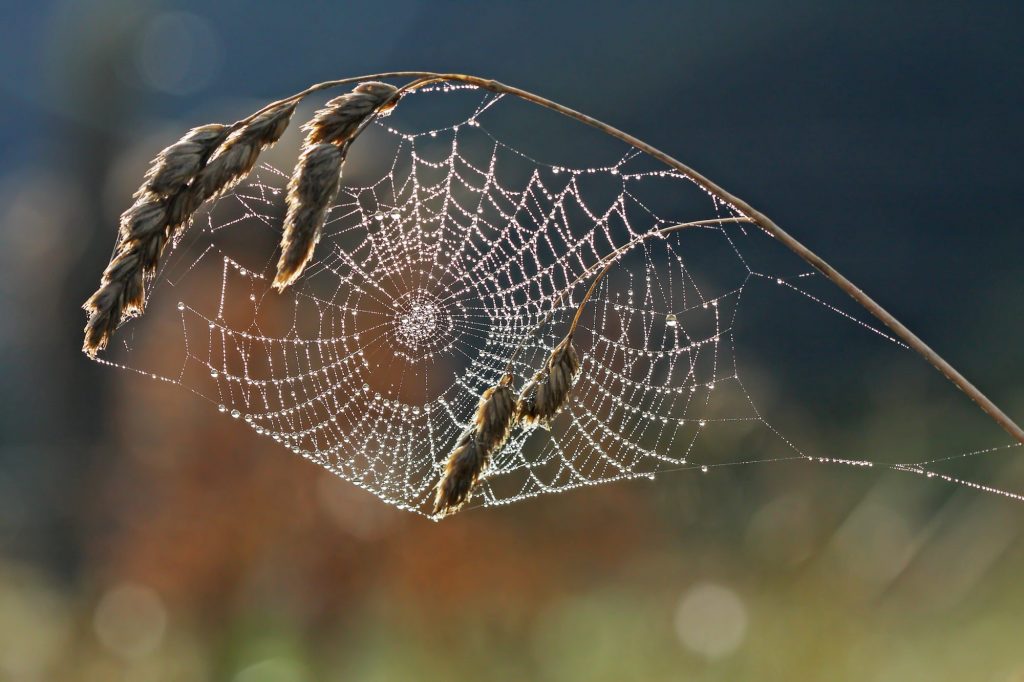 Ed Andrews gets up close and personal with one of our most fascinating creatures – the spider.

Spider silk is the strongest natural fibre ever discovered. For its size, it’s stronger than both steel and Kevlar. Being finer than a human hair, it combines this immense strength with flexibility and lightness. It is no wonder that, for many years, scientists have been trying to mass-produce spider silk with very little success – while silk worms can be farmed for their silk, spiders have a tendency to eat each other if confined in close proximity! In April it was announced that scientists have been successful in introducing genes from spiders into tobacco plants so the plants produce the silk in a form that can be harvested, which could lead to new products that exhibit the remarkable properties of spider silk.

Autumn drifts in and the amount of spider silk around the country reaches a peak. Early morning dew crystallises on the webs, creating a sparkling scene. Around Severn Valley Country Park, once invisible webs now seem to grace every tussock and hawthorn tree. The ox-eye daisies that brightened the grassland margins have faded. Their stems will remain upright until the first frosts fell them. Attached to the stems are the silken webs of labyrinth spiders.

Labyrinth spiders build sheet webs. As the name suggests, these are horizontal webs. Their web culminates in a ‘retreat’, a tunnel that gets progressively narrower, like a funnel. Its walls are silk spun so thick, it looks white. Peering down the tunnel, my line of vision is drawn ever deeper by the spiralling silk of the walls – for a moment I’m in a trance and the white walls are blanking out the rest of the world. I suddenly realise I’m looking directly at a labyrinth spider who’s appeared at the end of the retreat. Mottled brown in colour, this handsome beast mainly feeds on grasshoppers that get caught in the web.

In the corner of one of our bedrooms is a loosely slung web. One morning I watch a spider emerge and delicately wrap a fly in silk. Named after their extremely long legs, this daddy long legs spider is one of a species that does not like cold conditions so thrive in our centrally heated homes. They are voracious predators with a range of weapons in their arsenal. As well as catching flying insects in their webs, they also raid the webs of other house spiders. They can even fire silk strands to trap prey.

One of the easiest spiders to identify is the garden cross spider. They are very common and have a large bulbous abdomen with a distinctive white cross. I’ve been observing a garden cross spider on a buddleia in our garden this autumn. Daily observation of a wild animal in this way has proven to be utterly absorbing.

The garden cross spider is a member of the orb web family. Unlike sheet webs, orb webs are vertical and represent the most complex web we see in Britain. Spiders produce silk from organs called spinerettes. Firstly they fire a strand of silk across a void to get the first anchor point. They then use strong ‘droplines’ to make a ‘Y’ shape. The spider then pulls out radials – if you imagine an orb web as a bike wheel, the radials are the spokes and give the strength to the web. Next, the spider spins circular construction strands. The final stage is adding the sticky silk threads to snare prey. One web is made of up to 20m of silk!

By late afternoon, the web on my buddleia would be decorated with black flies, each stuck to the silk and frozen in time. I’m not sure if it was the way their wings were held slightly ajar or the twisted angle of their tiny bodies, but the scene reminds me of discovering a gamekeeper’s gibbet when I was young, when crows hung from a barbed wire fence.

By each morning, a brand new web had appeared, perfectly symmetrical and clean. I came to realise that the spider was rebuilding the web every single night. One night I went out and, sure enough, the spider had emerged from his hiding place within a dead flower head and was studiously spinning, under cover of the autumn darkness.

Arachnophobia is one of the most common phobias. Unfortunately spiders suffer from negative reporting that further encourages people to be fearful of them. This is particularly noticeable in October as shops fill with ‘scary spider’ decorations. We need to teach our children to respect and understand all British wildlife. This year, why not do a Halloween activity with a difference – go hunting for spider webs in your local park and then get the children to make their own web. For some inspiration, check out pinterest.co.uk.