Wildlife diary – A king among birds 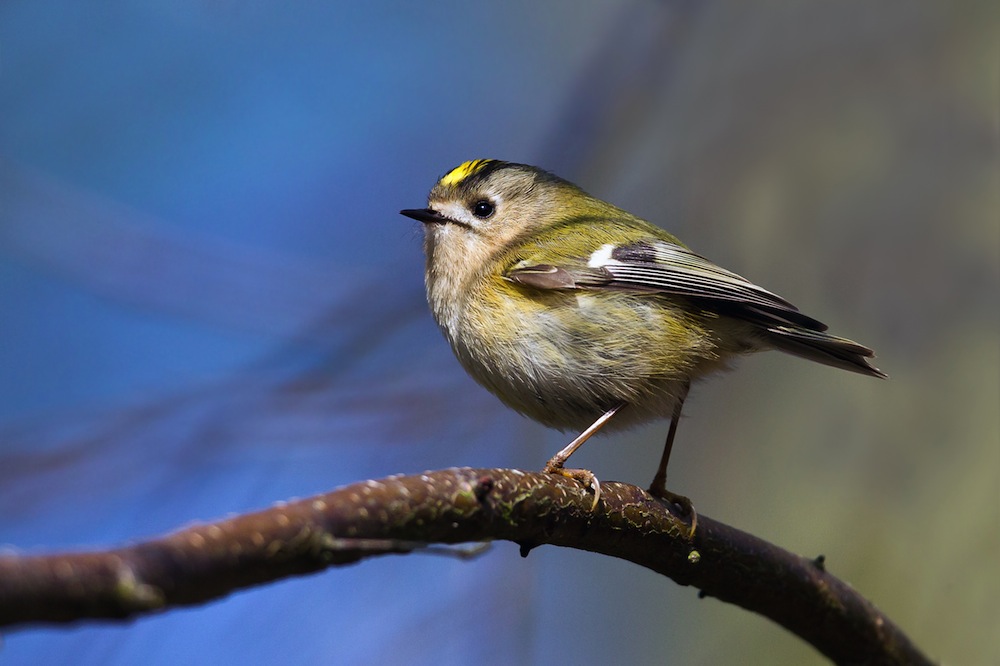 Ed Andrews finds out that small can be beautiful in the case of the diminutive goldcrest.

The sight of certain birds in our skies can stir strong emotions. The arrival of swallows carries the promise of the sunny, cloud-free days of summer, while the appearance of redwing and fieldfare heralds autumn’s berries, dark nights and frosty mornings. Other species, however, don’t appear and disappear as a whole but rather, our resident birds’ numbers are boosted at certain times by visitors from afar. This is the case with the goldcrest, which, together with the closely-related firecrest, is the smallest British bird.

According to the Greek philosopher Aristotle, there was once a contest to determine which of all the birds could fly highest – the winner would be declared king of birds. It seemed the eagle was sure to win, and that mighty bird flew higher and higher until it was a mere speck in the sky. But the effort sapped the eagle’s energy and he began to tire. At that point, a tiny golden bird emerged from his tail feathers, having hitched a ride, and, as the eagle started to lose height, his small stowaway took the opportunity to fly higher… and was christened king of birds. The bird was adorned with a crest on his head; the goldcrest.

Goldcrests breed in Britain but their population is swelled in autumn with birds flying over from Scandinavia. They hit the east coast of England before slowly spreading west to find suitable habitat in which to over-winter. The goldcrest has a tiny bill perfectly adapted to picking insects from between pine needles, and because of this they can often be found in coniferous forests such as Haughmond Hill, a Forestry Commission-owned site with way-marked walking routes.

Haughmond Hill is famed for its wonderful views looking towards the county town of Shrewsbury. Near the car park, I enter the first of many pine plantations. If you are used to walking through broad-leaf woodland with twists and burs and loping branches, pine trees can seem straight-edged and symmetrical. Today they are gently swaying in the breeze and the homogeneity gives a peculiar sense of peace, which contrasts sharply with the frenetic activity that is happening in the branches above me. A goldcrest is scurrying amongst the pine needles, picking out morsels such as moth eggs and spiders. The bird barely stops for rest; goldcrests must constantly seek food because of their high metabolic rate. It’s impossible to tell if this individual is a visitor to our shores or a resident.

Changes in our woodland

Further along the path I spot a monument that dates back to a time when the hill was free of pine trees; a magnificent oak tree. I estimate the tree to be at least 400 years old. Nearby I find a moss-covered log covered in the bright green, ‘shamrock’ leaves of wood sorrel. This is an ancient woodland indicator plant, confirming that parts of the site were wooded well before the conifers were planted.

Following WWI, there was a national timber shortage. The Forestry Commission was tasked with increasing production and was given authority to purchase land and plant large amounts of non-native conifers, which have the advantage of being quick-growing and tolerant of poor soils and harsh weather. Of course, conifer woodlands have their own unique character and associated species (such as the goldcrest). Unfortunately, little attention was paid to the existing wildlife value of the sites that were being planted upon, and conifer plantations completely changed the characteristics of many sites. In the case of Haughmond Hill, it’s likely that ancient woodland was cleared to make way for the conifers. The upland heathland once here was also planted with conifers, meaning this habitat was also lost.

Beyond an area of clear-fell, the scale of planting becomes apparent. The skyline is framed with thousands of dark evergreens, set against the grey sky. But the cool breeze brings change, chasing away the clouds as blue sky moves over. Young trees have been planted nearby, and closer inspection reveals these are oaks. The Forestry Commission now has a much broader remit that focuses more on conservation and mixed planting, meaning Haughmond Hill should have a brighter future.

Goldcrests battle the weather, hunger and exhaustion on their journey to over-winter in our coniferous woodlands. In March, some of those birds will make the return journey to nest in Scandinavia, and they’ll be replaced by our summer visitors, some of which will have over-wintered in Africa. These birds must pass over Malta where spring hunting is still allowed for quail and turtle doves, themselves declining birds, and other migratory birds may also be shot, including birds of prey, swallows, swifts and warblers. If you’d like to see an end to these practices, sign the online petition at https://secure.avaaz.org/en/petition/Stop_Spring_Hunting_in_Malta/