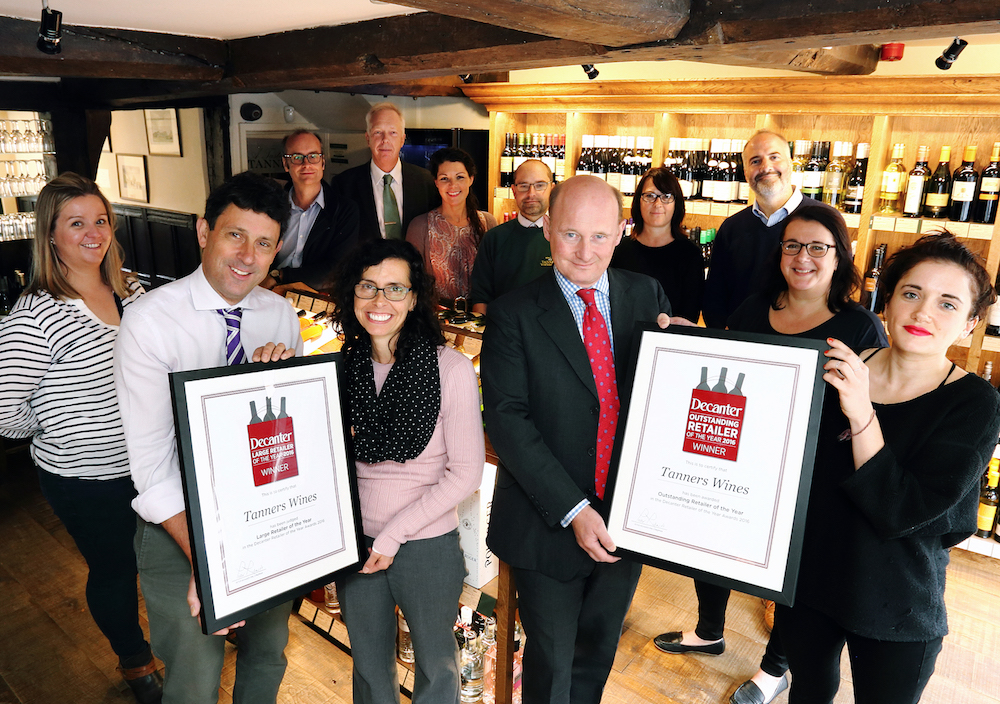 Though Tanners knew they’d been shortlisted in the Large Retailer category, their success as Outstanding Retailer of the Year – announced on the evening – came as a welcome surprise… especially as they saw off competition from some of the country’s biggest wine retailers such as the Wine Society, Marks & Spencer, Waitrose, and Aldi. The judges were impressed by how Tanners “continue to innovate and serve their customers in engaging and delicious fashion…”

A Ludlow Food Centre cheese picked up a bronze award at the World Cheese Awards in November. Bringewood, a semi-soft cheese washed in cider brandy, was recognised at the 29th annual World Cheese Awards, held in San Sebastián. Ludlow Food Centre’s cheese-makers had entered two other products – Ludlow Blue and a brand new cheese called Shropshire that will be ready for sale this year.

Dudley Martin, Ludlow’s dairy manager, says, “I’m absolutely thrilled Bringewood has won bronze as it’s such a unique cheese, and for our handmade cheese to be recognised worldwide is a privilege.

We collect milk each morning from our own herd of Friesian cows and bring it back to the Centre to start the process immediately. We make eight varieties of cheese and are thrilled our newest has continued our award-winning tradition.”

Cheeses from more than 30 different countries were lined up in front of 250 judges from every corner of the globe, including international buyers, retailers, writers and cheese-makers, providing a golden opportunity for artisan producers to spotlight their cheeses on a world stage.

Much Wenlock Country Market is recruiting keen bakers to help stock their weekly stall under the town’s Corn Exchange, outside the library. Market secretary Liz Rogers explains, “We’re looking for male and female bakers of any age over 16 to bake cakes, savouries, brownies – basically whatever you enjoy baking! You commit to whatever you feel you can do, whether that’s one cake or several. If you’re interested, the best thing to do is to come down to the market between 8am and noon on Thursdays and have a chat.”
Bakers need a Health and Hygiene Certificate to be considered. Call 01952 727061 for more information.

A taste of Germany has been brought to Shropshire by an enterprising Shifnal couple who were sick of waiting until Christmas to enjoy it. Charlotte and Tim Walters fell in love with the tea cakes at Birmingham’s German market – so they created Dinkiez, their own twist on the Teutonic treats, and are selling them at food markets throughout the county.

“As a bit of a chocoholic, my favourite was always the teacakes,” explains Charlotte. “The trouble is, we couldn’t get them for the other 11 months of the year. So we thought we’d find a way of making them more accessible by making them ourselves… and they’re going down a treat!”

The couple took their teacakes on tour to Shrewsbury, Cosford, Telfood Feastival, Newport Food Frenzy and Bridgnorth, among others. They’ve also sold at Much Wenlock and Market Drayton markets and have supplied their first wedding.

Flavours include milk, white, rum and raisin, cherry, chocolate orange, Irish cream and a host of others – and for Christmas Charlotte and Tim tried out varieties including mulled wine and eggnog. The teacakes have a flavoured beaten egg white filling on a wafer base, covered in chocolate – “and they’re only 70 calories each!” adds Charlotte. You can buy Dinkiez online at dinkiez.com or find them on Facebook.

Royal Seal of approval for ‘King’

Shropshire chef Suree Coates is no stranger to awards – but recent recognition from the Thai royal court has been a particular honour for the Broseley-based chef. As well as Shropshire Curry Chef and Thai Curry Chef of the Year, Suree can now add ‘Royal Seal of Approval’ to her accolades – and her restaurant, the King and Thai, is one of 14 venues in the UK and only seven outside London to enjoy the honour. ‘Thai Select’ is granted to Thai restaurants overseas that serve authentic Thai food – it recognises ‘consistent dedication to traditional Thai methods in cuisine, service and high standards’.

“I was so humbled to receive the award,” says Suree. “I didn’t even know we were being considered. To be honoured by the Thai royal household is the icing on the cake for my career.” Being born in Thailand and remaining passionate about my homeland and its culture and cuisine means being recognised in such a way really is special.”

Coffee at the lodge

A family who’d been seeking the perfect base for a coffee shop had virtually given up hope when they happened upon the café at Coalbrookdale’s Green Wood centre – formerly known as Cherry’s.
Jody-Lea says, “We didn’t want a high-street location, but something a bit different. We weren’t sure we’d find exactly what we were looking for, so we created our own by converting an old Citroen Hvan into a bright orange coffee and churros van! We’d been trading for a year when we saw Cherry’s available for tender. It was perfect!”

After renovating the property, the family started trading last June. As Jody-Lea explains, “We’ve been overwhelmed by the support of everyone here in Coalbrookdale. We’ve sadly sold our van, but we couldn’t be happier here in the ‘coffee lodge’.”

‘Kynn’ is hit with Camra

A Shropshire pub has been named Pub of the Season by the local branch of Camra. The Kynnersley Arms at Leighton, between Ironbridge and Shrewsbury, was presented with a certificate in November to commemorate its being selected as Pub of the Winter 2016. Kynn landlord Mike Antoszkiewicz was thrilled, saying, “We’re a traditional country pub serving home-cooked food and it’s hugely important to us to also keep our Camra visitors happy.”

The pub, a Grade II listed building that was brought back from dereliction following a refurbishment in 2013, offers a rotating choice of five real ales. The Kynn houses a corn mill dating back to the Domesday Book and a cellar which houses a 17th century, preindustrial blowing arch blast furnace and water wheel. In 2001 the pub was the focus of Channel 4’s Time Team show, when Tony Robinson took his team back to the earliest beginnings of the Industrial Revolution.