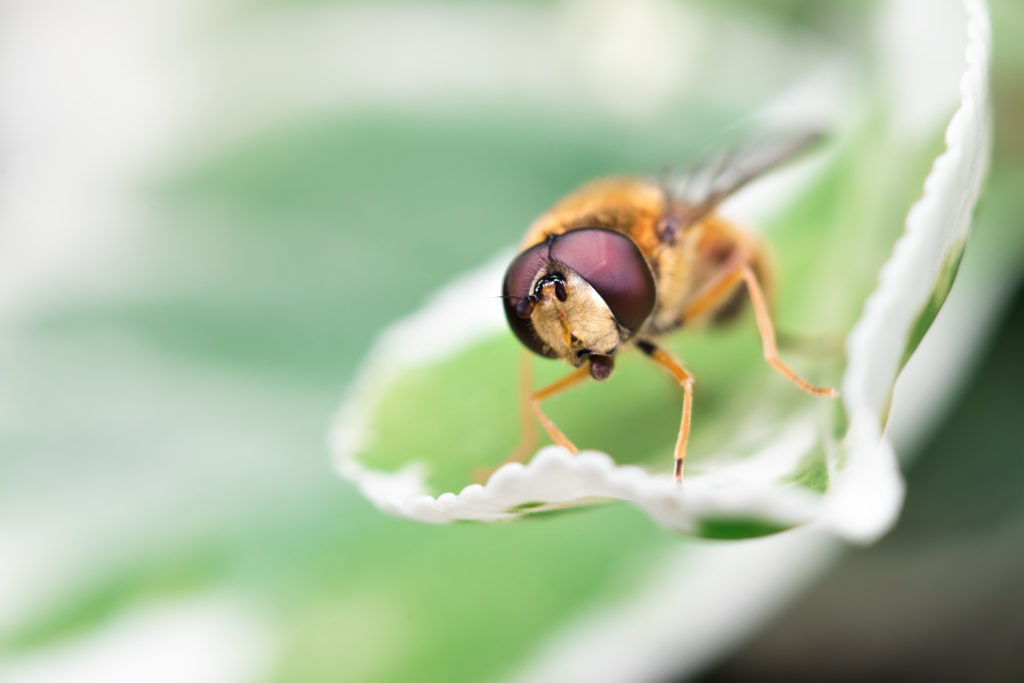 Ed visits New England, an area forgotten by time, and is shown some spectacular sights from the insect world.

A quiet lane leads down an ever-steepening slope from Highley towards a ford that crosses the Borle Brook. After heavy rain, the water level in the brook can quickly rise and several vehicles have been swept downstream when attempting to cross. From here the brook flows through the woodland of New England to eventually reach the Severn at Brooksmouth Bridge. A tramway once followed the course of the brook, carrying coal from Billingsley to be loaded onto barges on the river. Since those early days of industry, time has largely passed New England by.

On a sunny day in early summer, I meet Nigel Jones from Shropshire Invertebrate Group near the footings of an abandoned cottage that once stood in these lonely woods. He immediately presents me with a clear plastic pot containing a spectacular-looking hoverfly which he has found near the water’s edge. The fly is dusted with golden hairs and has a faintly striped thorax. This is a rare species called Chalcosyrphus eunotus, a specialist of the Welsh Marches. The presence of this species at New England is a useful indicator of high-quality habitat.

We walk through clouds of forget-me-nots and red campion and clamber down nettle-covered banks to reach the brook. Down here beneath the underwood, with our feet in the cool water, we follow a grey wagtail as it flies across the surface. The water sweeps around in capricious bends. The bank-side has been carved away by repeated winter flooding, leaving tree roots exposed.

“This is the closest I will ever come to jungle exploration” are Nigel’s words as we wade through a deeper stretch of water and duck beneath an overhanging hazel bough. Nigel is an expert guide to the insects that make their home at New England. He shows me the tiny shore flies that live amongst the exposed shingles at the edge of the brook and tells me about the silver stiletto fly that he has recorded near some local streams. The fearsome larvae of this species lives buried in sandy soil, poised to drag unsuspecting invertebrates down into an underground lair to meet a grisly end. 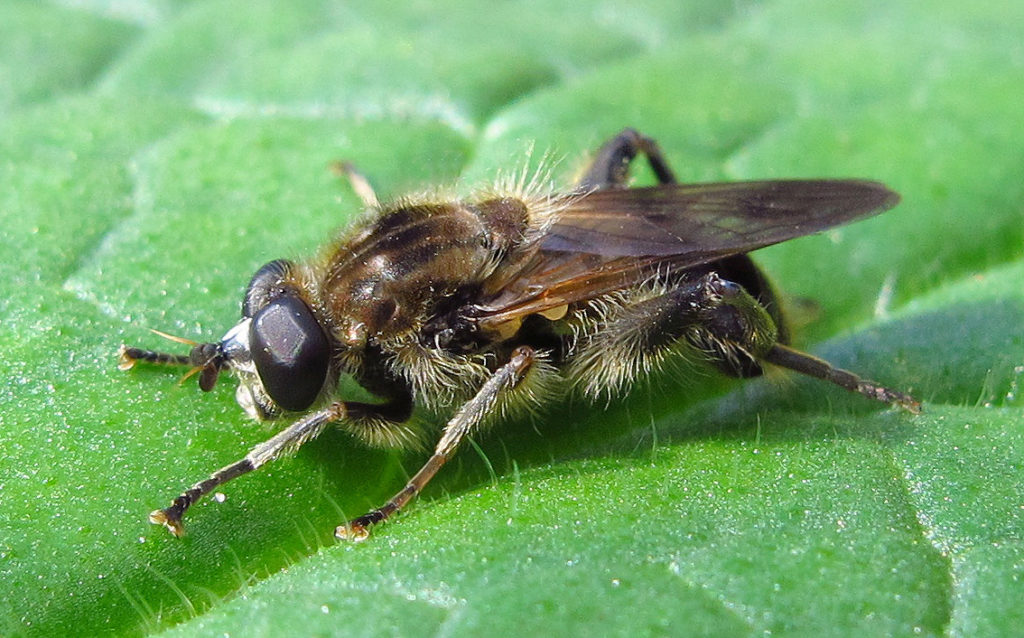 We carefully climb over an alder tree that has fallen into the brook. The woodland at New England is owned by Shropshire Council and managed as public open space and wildlife habitat. Woodland management is deliberately slow-paced and subtle, allowing natural processes of death, decay and re-birth to take place. Fallen deadwood is valuable habitat for insects like Chalcosyrphus eunotus. The female lays her eggs in rotting wood in streams and the larvae develop inside. Hoverfly larvae look like small maggots and often have a long ‘tail’ that is actually a breathing tube, allowing the larvae to survive semi-submerged in water. 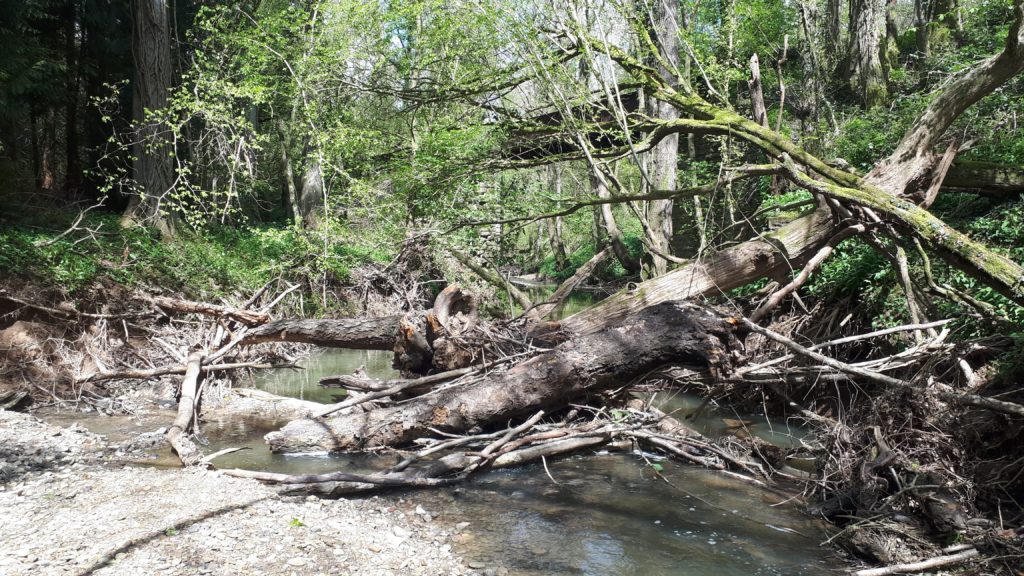 The importance of insects

We emerge from the stream into a sunlit glade, amongst a carpet of white stars. The wild garlic is in bloom. Nigel shows me another species of hoverfly. Black and grey in colour, this is a species that is intimately associated with the garlic. Adults feed on the nectar-rich flowers and the larvae tunnel into the bulb, where they spend winter. 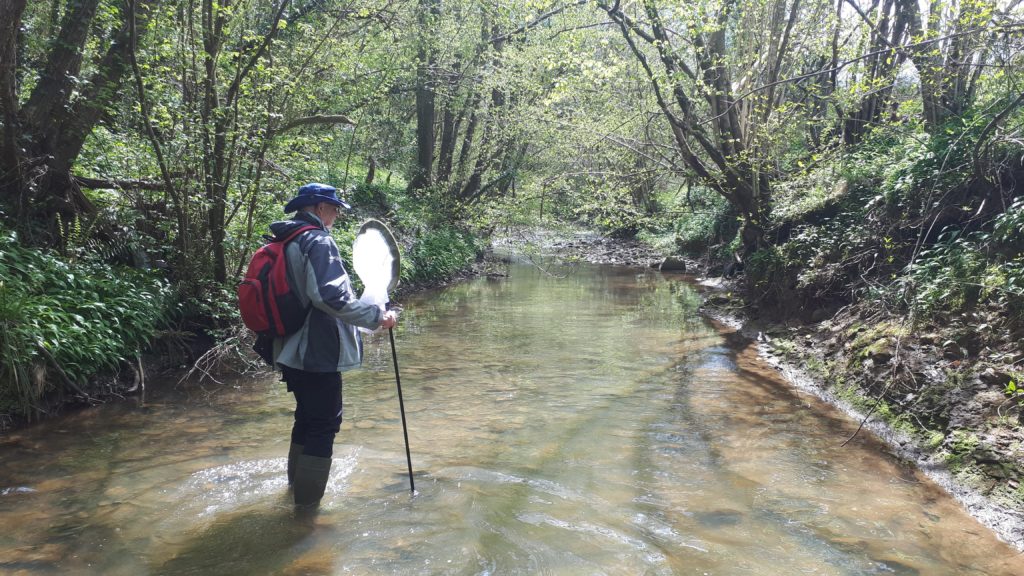 As our visit comes to an end, Nigel shares with me his concerns about the reducing abundance and diversity of flies that he is seeing across the wider countryside. Whilst easily overlooked, insects occupy important niches such as pollination and control of pest species. Entire ecosystems are built on relationships between organisms and insects are always a key component. It is the same ecosystems that give us the ability to grow food and have clean water. Every species that we lose makes the web of life a little less stable, and the world a little less interesting.

As we walk back to our cars, Nigel spots the most spectacular insect of the day. Basking on a leaf near a patch of stitchwort is a species of parasitic fly called Conops vesicularis. Black and yellow in colour with a slender waist, it looks a lot like a wasp. It is equipped with a body part called a theca. Using this sharp spike, it prises open the body parts of insects such as hornets and lays an egg inside them. Once hatched, the fly larva then lives inside the hornet and slowly devours it from the inside before eventually emerging as an adult fly. Frequently gruesome, intricate and wonderful, a plethora of insect lifecycles are playing out in the undergrowth at New England. 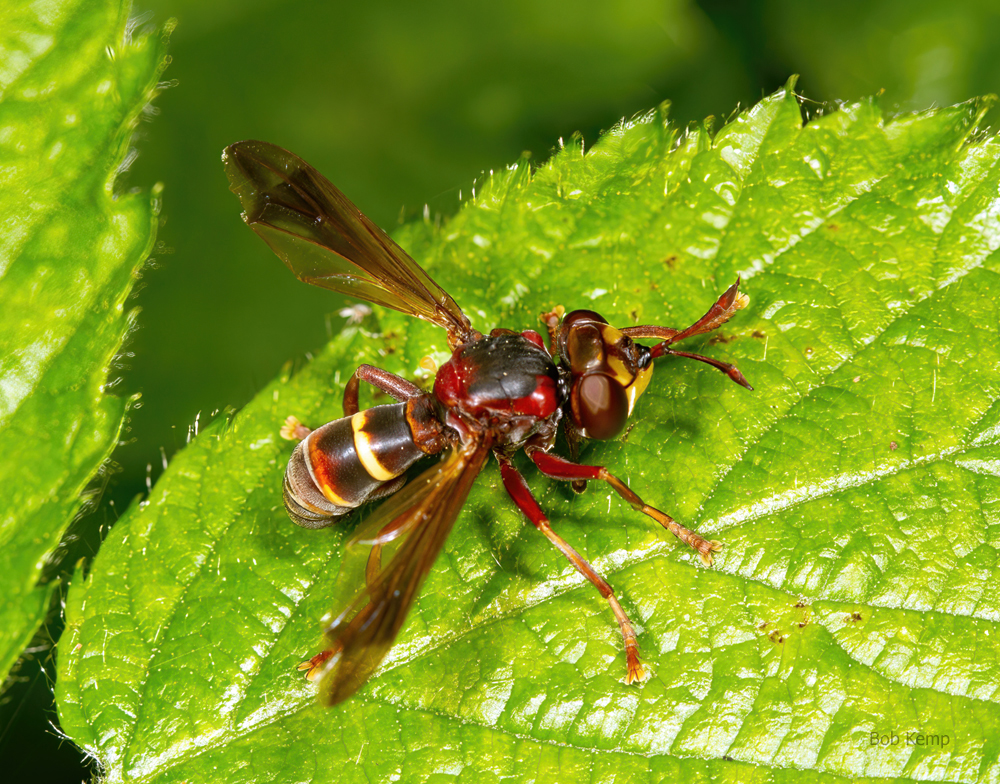 We can all help beneficial insects to thrive in our gardens by growing pollinator-friendly plants and avoiding the use of pesticides. To go one stage further, why not build a hoverfly lagoon? Some species of hoverfly lay eggs in rot holes in trees. Hoverfly lagoons are a simple way of creating an artificial rot hole. All you need is a plastic milk bottle containing some decaying plant material and water. Academics at the University of Sussex are running a citizen science project this summer, asking people to check their lagoon each month and submit records of hoverfly larvae. For more details, please see www.thebuzzclub.uk/hoverfly-lagoons