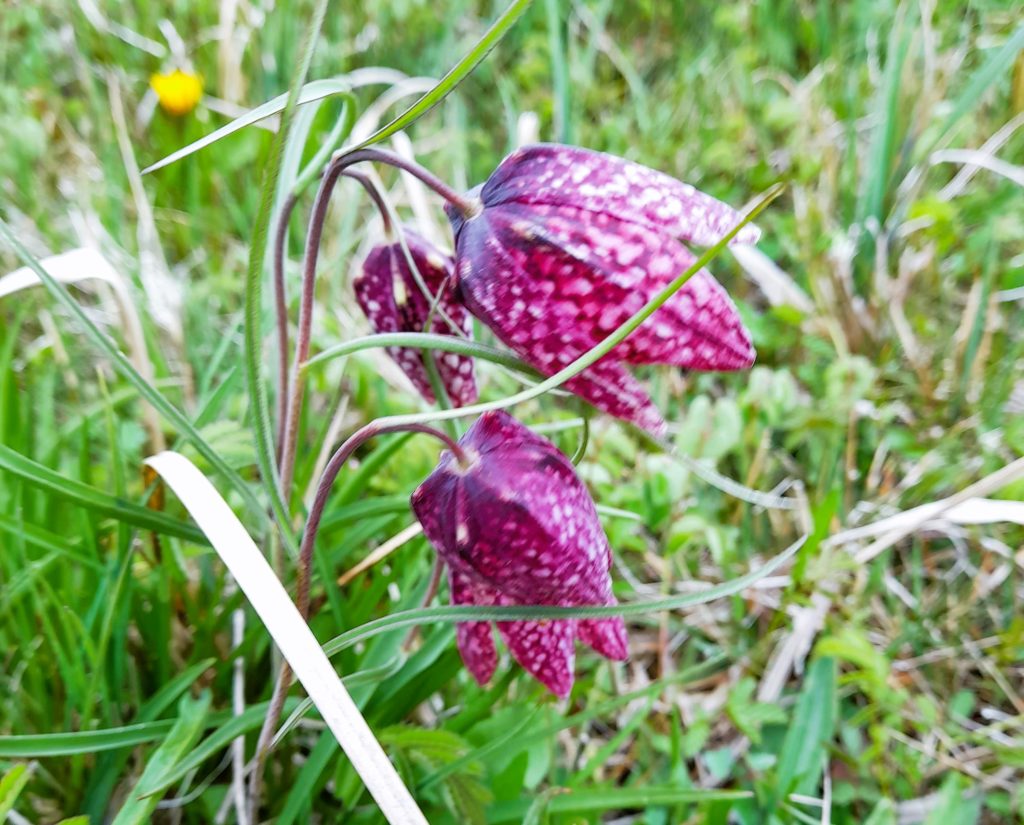 Ed marvels at one of our rarest and most beautiful wildflowers, which faces a dicey future.

“The fact is the sweetest dream that labour knows.

My long scythe whispered and left the hay to make.”

Extract from ‘Mowing’ by Robert Frost

As you read this article, hay-cutting season will be under way. This age-old farming technique helps to create conditions for one of our most stunning and threatened native wildflowers. Mottey Meadows in Staffordshire is the most northerly location for wild snakeshead fritillaries in the UK. The plant shows a definite preference for more southerly sites and milder conditions. Across the entire UK, there is a mere 2,000 acres of floodplain meadow left. Mottey Meadows represents 5% of that national total.

The name fritillary comes from the Latin word fritillus meaning ‘dice-box’, as the petals are marked with a subtle chequer board patterning. Only the very best floodplain meadows are home to wild fritillaries. The largest population is at North Meadow in Cricklade, Wiltshire. When the Cricklade fritillaries are at their peak, their exquisite flowers stretch as far as the eye can see, a claret horizon over the floodplain of the Thames. If conditions aren’t quite right in any given year, the plants will stubbornly refuse to flower. This has helped to create a shroud of mystery over the fritillary.

We now understand more about the ecology of the plant and how its survival is intricately linked to the gently flowing waters of our streams and rivers. Mottey Meadows borders a section of the brook of the same name. Seasonal flooding deposits rich silt on the meadows, a wonderful medium for growth. The flooding also helps to create patches of bare earth into which the fritillaries can seed. A layer of free-draining sand and gravel runs beneath the clay and peat of Mottey Meadows. This allows the site to dry quickly following flooding, creating ideal growing conditions for the fritillaries which cannot tolerate long periods of water-logging.

Mottey Meadows was declared as a National Nature Reserve in 1978 in recognition of the huge variety of flowering plants and grasses that have been recorded (over 240 species). I joined a small group of people in late April who were attending a guided walk with the site manager Paul Shires, who works for Natural England. We had chance to admire and photograph the fritillaries, including the more unusual white version of the plant. Paul told us how his team carefully manage the meadows in a time-honoured way to ensure that hay-cutting and grazing take place at the correct time of year.

A former drain divides one of the fields. For most of the year the drain would be invisible, nothing more than a shallow depression in the ground. Today it is marked as a vibrant yellow band of kingcups flowering in the marginally wetter soil within. A network of these drains or rhines once carried water from the brook across the meadows, maximising the reach of the silt-rich floodwaters.

An 1856 map of Mottey Meadows shows that the land was sub-divided into narrow strips. These are known as doles and they would have been tenanted by local people for hay and grazing. The fact that one person did not own the whole site probably helped to protect these meadows. Had it not been for this, they may not have escaped the plough. At North Meadow in Cricklade, ancient stone markers represent former boundaries between doles. However, at Mottey there are no physical boundary markers evident. It may be that the location of the individual doles was etched nowhere else than in the collective conscience of the local village.

This rooting of the meadow and its wildlife in the community manifests itself in other ways. On the guided walk I met a lady who lives in Wheaton Aston. She told me how the villagers have their own name for the fritillaries and that the first Sunday in May was always known as ‘Folfalarum Sunday’. Villagers would collect basketfuls of the flowers to decorate their houses. She told me that her husband was a keen photographer. He loved this place of light and shadow, colour and movement. She has planted a rowan tree in his memory in the hedgerow.

A black poplar tree marks the end of the skylark song and flowers and the beginning of the modern farmed landscape. Many of the surrounding fields are now used to grow crops like Maize. The threat of slurry washing off these fields is a constant concern. Natural England have dug a drain deep beneath the meadows to try and capture this run-off. Paul showed us a patch of lush green rye-grass that is clearly visible against the tapestry of meadowsweet and greater burnet leaves. This was the result of a short period when the drain got blocked and nutrient-rich water spilled across the ground. This kind of enrichment favours quick-growing grasses, to the detriment of the flowers.

Mottey Meadows is a sepia picture at the beginning of a photo album; a snapshot of a former time. The naturally high fertility of the soil has allowed a hay crop to be taken for over 500 years. Paradoxically it is the modern manifestation of these same agricultural principles, where productivity conquers all, that could threaten the very existence of this flood-kissed, flower-rich turf.

There are now 225 National Nature Reserves (NNRs) across the UK. 2022 marks the 70th anniversary of the first NNR being declared. To celebrate this, Natural England are organising a series of events to allow people to discover these inspiring places. Why not attend one.