A trackway is defined as, a path formed by the repeated treading of people or animals.
Since civilisation began, humans would have needed to travel between different parts of the country.

I recently walked St. Michael’s Way in Cornwall, a coast to coast route from St. Ives to St. Michael’s Mount. The route is an ancient pilgrims walk that people would have used to cross Cornwall on their way to the Cathedral of St. James in north west Spain. Pilgrims would have walked this route to avoid having to circumnavigate the dangerous waters around Lands End.

Other footpaths follow old drover’s routes that people would have used to transport animals to market and between different areas of pasture. Of course, traditional Romany folk live a life that is defined by travel. In times gone by, many trackways would have been utilised by the gypsies moving around the countryside in their bow top caravans, following the seasons and harvesting wild bounties in hedgerows and dingles.

Some old trackways are eventually adopted as modern roads. Around Shropshire you occasionally see a lichen-encrusted milestone at the side of the road. This indicates an old route. Other trackways end up covered in a tangle of briars and clematis, a hidden monument to journeys made… the old footprints slowly eroded by the cool breeze blowing through the trees.

Horse-drawn vehicles would have had a minimal impact on the land. Green lanes would have snaked their way through the landscape, following the contours of the ground. Modern roads, however, need to be heavy duty. A thick layer of smooth tarmac, crash barriers and metal road signs change the land permanently. The only reminder of the ground that once stood there is the ribbon of green alongside the tarmac. For many people, on their daily commute to work, the road verge may be closest thing that they see to the countryside.

In late May and early June, road verges are covered in the white flowers of cow parsley. This is a member of the Umbelliferae family of plants. The flower heads (called umbels) are the shape of upturned umbrellas and are popular with hoverflies that feed on the nectar. By this time of year, road verges are alive with poppies. This is an arable weed that finds refuge in the narrow strip of land between tarmac and farmland.

The most impressive road verge flowers that I heard about were the bee orchids that bloomed alongside a busy road in Telford. What a great example of an exotic-looking flower growing in a very modern setting!

Tussocky vegetation in road verges also makes great habitat for voles and other small mammals. Voles exhibit cyclic population explosions. This provides a bounty of food for birds of prey such as kestrels. A kestrel hovering over a road verge is a common sight, their piercing eyes scanning the grassland for any sign of movement. 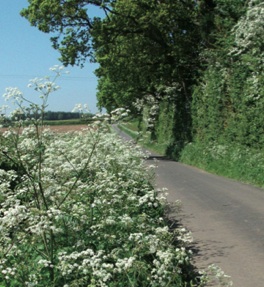 Badgers will use the same ancestral trackways for hundreds of years. Each evening they tread the same route from the sett to their foraging ground. Unfortunately, modern highways have not been kind to badgers. Thousands of the animals are hit by vehicles each year.

The relationship between our wildlife and modern roads is a bittersweet one. Whilst many thousands of animals are killed each year by vehicles, road verges have become a refuge for many species of wildflower, mammals and even reptiles such as grass snakes. Verges often escape the chemicals that are sprayed on neighbouring farmland. They are not cut as short as village greens and lawns, allowing wildflowers to seed. They also have minimal disturbance by humans. The total area of road verge across the country
vastly outweighs the area of land managed for nature conservation. Managed correctly, they have the potential to be a huge linear nature reserve. If we manage our verges to be full of flowers, we will also bring colour to our daily journeys.

All around Shropshire this month, Union Jack flags adorn houses and shops as our national pride swells about the Jubilee, the football and the upcoming Olympics. With the red of the poppies, the white of the stitchwort and the blue of the speedwell our road verges are also something to cherish and be proud of.

Do one thing for wildlife this month:
Our road verges are always at risk of being mismanaged. If they are cut too early, flowers cannot set seed. If cuttings are left to rot down, the soil is fertilised and becomes too rich for many flowers. The charity Plantlife is running an online campaign where you can rate your local road verges and give feedback to the council on how they are being managed. So if you have a verge near where you live that you think is a bit special, or in need of a different form of management, please let Plantlife know!
  
  For more details see: www.plantlife.org.uk/ campaigns/roadverges/

 Each month we will be following the seasons around us, featuring the What’s What Wildlife Diary with our nature expert, Edward Andrews, MSc.