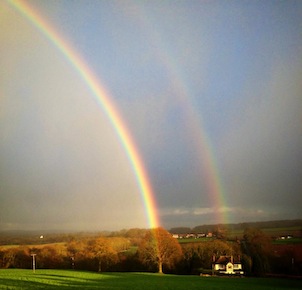 For one Bridgnorth woman, her hobby of weather-watching has become a family affair. Sally Themans finds out what motivates her.

Following the events in Oklahoma earlier this year with not one but two devastating tornadoes demolishing towns , destroying communities and claiming the lives of three seasoned ‘storm chasers’, I was amazed to hear about a real-life storm chaser living here on my doorstep. Intrigued, I went to meet Bridgnorth’s very own weather girl.

Victoria Royce-Williams, along with husband Paul, daughter Lucy (15) and 10-year-old twins Ollie and Joseph, plus colleagues of Victoria’s, comprise ‘Midland Storm Chasers UK’. Between them they monitor the weather day and night, and if there’s a storm, they load up their equipment – just like in the film Twister – and head out after it to monitor, measure and generally ‘experience’ it. ‘Chasing’ storms has seen them travel all over the country.

Although it’s Victoria’s full-time job, this is clearly a family affair with banks of computers in the kitchen, which serves as Bridgnorth’s very own weather station. Each family member has a device and is responsible for monitoring different aspects of a storm. The five of them chatter away excitedly as they watch the screens, which are hooked up to various satellites and radar, and plot lightning strikes as they move in across the Atlantic. They talk with incredible knowledge and understanding, and obvious enthusiasm for Victoria’s infectious passion.

Victoria laughs, “I firmly believe that science begins at home, so I involve the family as much as I can. I’m studying for a degree in earth sciences, but I’ve always been interested in the weather – storms especially. In the UK we have an incredibly varied and unsettled weather system… this not only makes life complicated for those trying to predict it, it also makes life very busy for our family…. but we’re providing a public service for people wanting absolutely up to date weather forecasts. Our Facebook page, Midlands Storm Chasers, got loads of ‘hits’ during the snowy weather.”

Victoria loves the current summer storm season most because there can be some high drama. “I guess I’m a bit of an adrenaline junkie,” she says. “The idea of storm chasers is not to live dangerously though; it’s to find out more about weather systems to help people and emergency services to anticipate and plan better. But I’ve been in some amazing places and seen some incredible sights. With the climate changing we’re seeing more extreme weather – it’s certainly getting wilder and wetter, as the 2005 tornado which hit Birmingham showed.

“Meteorology is only about 250 years old, but it’s so fundamental to our planet; for instance, if we could harness and store the power held in just one lightning strike, there’d be no need for wind farms or talk about finite resources.”

In the meantime, when I see storm clouds brewing, my thoughts are no longer contained by washing on the line or cancelled sports days – I think of that family who will be rubbing their hands in excitement and setting off on another adventure.