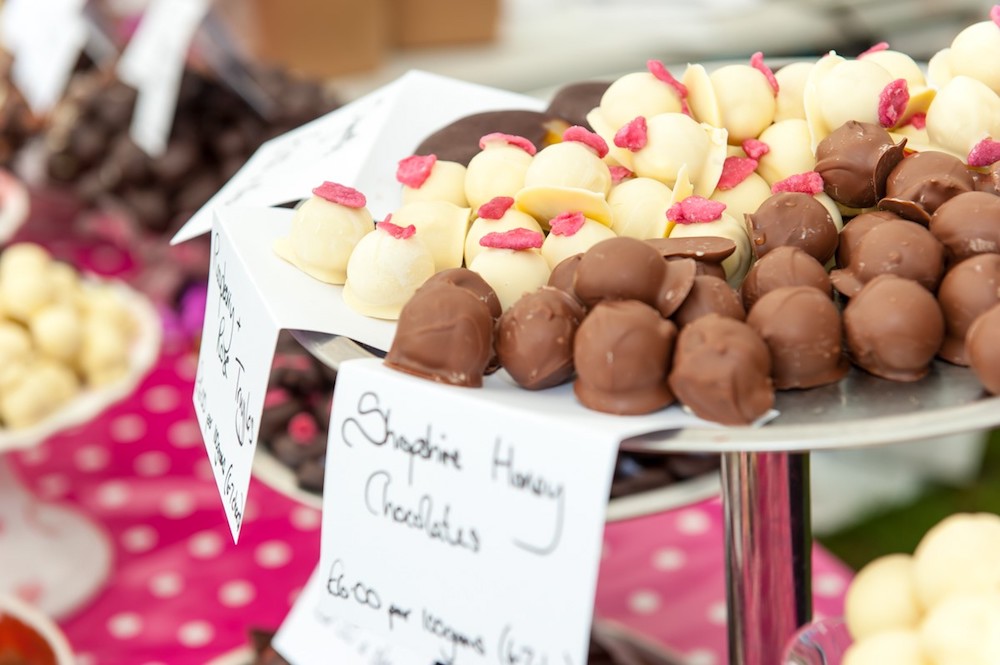 The organisers of the Shrewsbury Food Festival are absolutely thrilled that the festival has been nominated for the Best Festival in the Midlands in the What’s On? reader awards. The festival has been going for five years and attracts visitors and stall holders from far and wide and has become a firm date in the county calendar. Rachel Davy told WW!, “We’re so excited to be considered for such an award – which came as a complete surprise! We are up for both best regional and best in the whole Midlands; we’re passionate about what we do and we would like to thank those that nominated and voted for us.” The Shrewsbury Food Festival will take place on June 24-25. The group also organise the Kids Festival in May, Telfood in September and new for this year – Oktoberfest on 7-8 October.

Chris and Anna Walsh, who run Fish in Bridgnorth, have come up with an ideal solution for busy people – ‘ready to go’ fishy meals. “We know that people are busy and also that not everyone is confident about cooking fish or maybe we all need new ideas every now and again” says Chris, “At the same time people still want to cook ‘real food’ purchased from high street shops – proper home-made food without all the hidden additives and packaging.” So they are selling ready prepared complete meals – including a pairing sauce or suitable vegetable accompaniment, such as this; Cornish hake fillet in Parma ham with pea and ham hock sauce. All ready to cook at home.

There will be two ‘Stuart 17th century baking’ courses at Moseley Old Hall with tea time treats to take home; learn how to make herb bread and shape it into rolls in a variety of ways and use local ingredients to make a honey cake and lavender biscuits. A tour of the house is also included. The first, on Monday 6 March will be about the basics whereas the follow up on Monday 3 April will be for more advanced bakers. £20 includes tea/coffee and homemade shortbread as well as all the ingredients. Booking essential 0844 249 1895 or visit nationaltrust.org.uk/events

Success in a bottle for Bennett & Dunn

A Shropshire couple who diversified into food production are to be featured on the BBC TV programme Farming’s Country Showdown. When Rupert Bennett married Tracey Dunn, little did they know that nine years down the line their names would be fast becoming a household name in the world of culinary oils. The couple, whose business is based at Grange Farm at Hilton between Bridgnorth and Wolverhampton, decided to expand their business and launched Bennett and Dunn in August 2014.

“I’d been growing rapeseed previously and now I press and bottle it right here” explains Rupert,

“Our rapeseed oil is cold pressed and triple filtered for extra purity. It has many advantages over traditional oils; it is rich in Omega 3 which lowers cholesterol and improves heart health, it’s high in vitamin E and has half the saturated fat of olive oil giving a much healthier option. It also cooks at a high temperatures without burning so it’s very popular with chefs – indeed our oil is now being used in commercial kitchens in London’s Shard and Harvey Nichols.”

New for 2017 the couple have just launched ‘a recipe a week’ series on their website bennettanddunn.co.uk – with recipes using their oil by different celebrity chefs from across Shropshire. The oil is widely available in many farm shops and local retailers including Apley and Penny’s in Bridgnorth or it can be ordered online. Another great Shropshire foodie success story!

Bridgnorth Endowed School’s ‘Pensioner Lunch Club’ is going from strength to strength. Having kicked off with a special Christmas lunch in December, numbers of the town’s senior citizens who attend the twice weekly meals is growing. The idea comes from similar schemes around the country which encourages school pupils and the older generation to meet, interact and help each other. The hot meal, which includes a ‘set menu’ such as chicken fricasee, rice and vegetables followed by pear and ginger crumble or roast beef, yorkshire pudding and vegetables followed by lemon meringue pie, costs £4 per person and is served every Tuesday and Thursday. Pensioners just need to phone the school 01746 762103 to reserve a place.

By the time you’re reading this Fairtrade Fortnight will be well underway, running from February 27 until March 12. The theme this year is ‘It’s Time to Put Fairtrade in Your Break’ and the Bridgnorth group are hosting two special events under the town hall on Thursdays 2 and 9 March between 11am-1pm when a giant (42cm diameter) ‘Fairtrade Chelsea Bun’ which has been baked by Catherine’s Bakery will be shared along with free Fairtrade Coffee of Fruit Juice. Sixth form students from Bridgnorth Endowed School who are involved with the ‘Taste of Tanzania’ coffee project will have a stall where they will sell their coffee and talk about the project.

There will also be assemblies in all the schools during the fortnight to spread the Fairtrade message and a recipe book will be given out. The group would love to hear from anyone or any organisations who have a Fairtrade break; please send photos and ideas to ray@valgill.free-online.co.uk or to get more involved in sharing the Fairtrade message.

Baking in the Shropshire Hills

The Shropshire Hills Discovery Centre is hosting a series of ‘Better Baking’ workshops on Tuesday 21 March, Tuesday 28 March and Tuesday 4 April from 10am-2pm. Aimed at all levels, these relaxed and hands-on baking sessions are perfect for anyone who wants to learn how to make better cakes, breads and pastries. With guidance from chef Milly Reece, a wide range of pastry-making skills to produce delicious flaky-pastry pies, rich shortcrust tarts and Danish pastry treats for breakfast, lunch or tea-time will be covered. So, if your cakes and scones have been a bit hit and miss and bread making has defeated you then this course will get you baking confidently and with complete success. You will go away with bags of goodies and tips to help you carry on with your baking at home. Sessions cost £30 each, or £25 if you book all three. Please call 01588 676060 or visit shropshirehillsdiscoverycentre.co.uk by 14 March to secure a place.