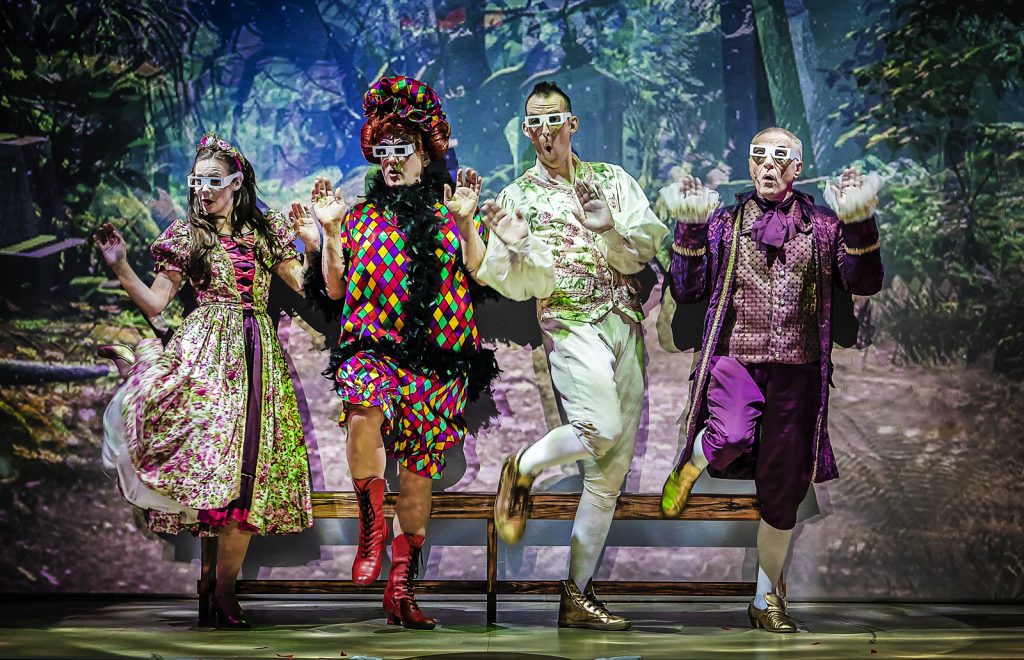 It’s one of our favourite winter entertainments, but the pantomime has been hit hard by measures to stop the spread of coronavirus.  What’s What! goes behind the scenes at theatres in the county and also speaks to one of the UK’s top panto dames.

Actually, this year he really isn’t. Sadly, that much-loved British institution, the annual pantomime, has been cancelled by theatres across the land.

Restrictions aimed at tackling the coronavirus pandemic have hit the live entertainment world particularly hard. When the UK went into national lockdown in March, ‘the show mustn’t go on’ was one of the immediate rules. And, as we approach the end of 2020, little has changed, with social distancing guidelines meaning mass audience events, particularly indoors, are virtually impossible to organise.

‘Show cancelled’ signs have gone up everywhere and, to the great disappointment of tens of thousands across Shropshire, that includes the annual pantomimes at The Place at Oakengates in Telford and Theatre Severn, Shrewsbury.

It is the same story for Broseley Amateur Dramatic Society (BroADS), whose plans to stage Jack and the Beanstalk early next year have also been thwarted by the pandemic.

It follows the government’s indication that it will not be possible until November at the earliest, to clarify whether indoor performances can take place without social distancing, making the staging of pantomimes this year pretty much unviable.

The one glimmer of hope is at Bridgnorth’s Theatre on the Steps, where a decision on the production of Dick Whittington in January has been deferred until the November update. 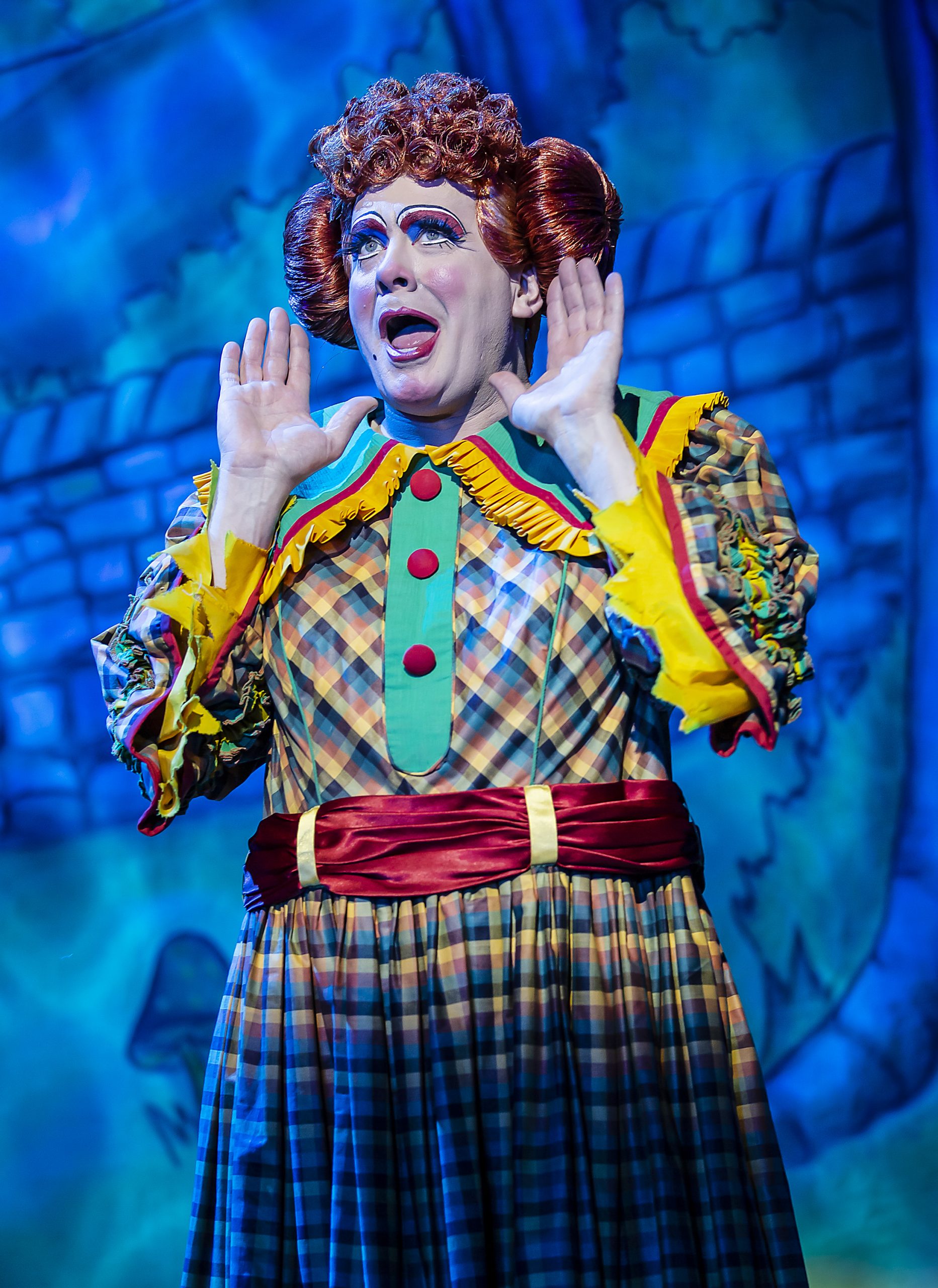 Brad Fitt in Mother Goose at Theatre Severn in Shrewsbury

At Theatre Severn, one of the country’s top pantomime dames Brad Fitt was due to celebrate his 10th panto in the town in a production of Beauty and the Beast. The show, which had been due to run from December 2 to January 10, has now been put back a year.

Brad, the star of Theatre Severn pantomimes since 2011, reflected, “I’m devastated that my tenth pantomime in my beloved Shropshire has had to be postponed.”

It means work to hone scripts along with learning lines, cast read-throughs, costume fittings, publicity photo-shoots and dress rehearsals have all been shelved.

So what does a dame do without a panto? Well for Brad, it’s not been a drag, if you’ll forgive the pun.

“Oddly, the year seems to have gone quickly,” he reflects. “You would imagine that when the theatres closed back in March and we all went into months of lockdown, the days would pass slowly.

“But I’ve found it fulfilling in a different way. Although a lot of my work is panto-based, it’s not all on stage. I write scripts and work behind the scenes as well.

“During the spring and summer I’ve done some writing, a bit of painting and a fair bit of DIY.

“I’m usually away on tour a lot of the time but being at home has meant I’ve been able to spend more time with the family. We have three boys, aged 10, 12 and 15, and we’ve had a great time doing things with them.

“We love quite energetic activities like kayaking and, as we’ve come out of lockdown, we’ve done far more outdoors and appreciated the countryside.”

Brad lives in the village of Titchwell on Norfolk coast and has seen a big increase in visitors this year, as more people have been drawn to Britain’s beaches because of the difficulties of overseas travel. 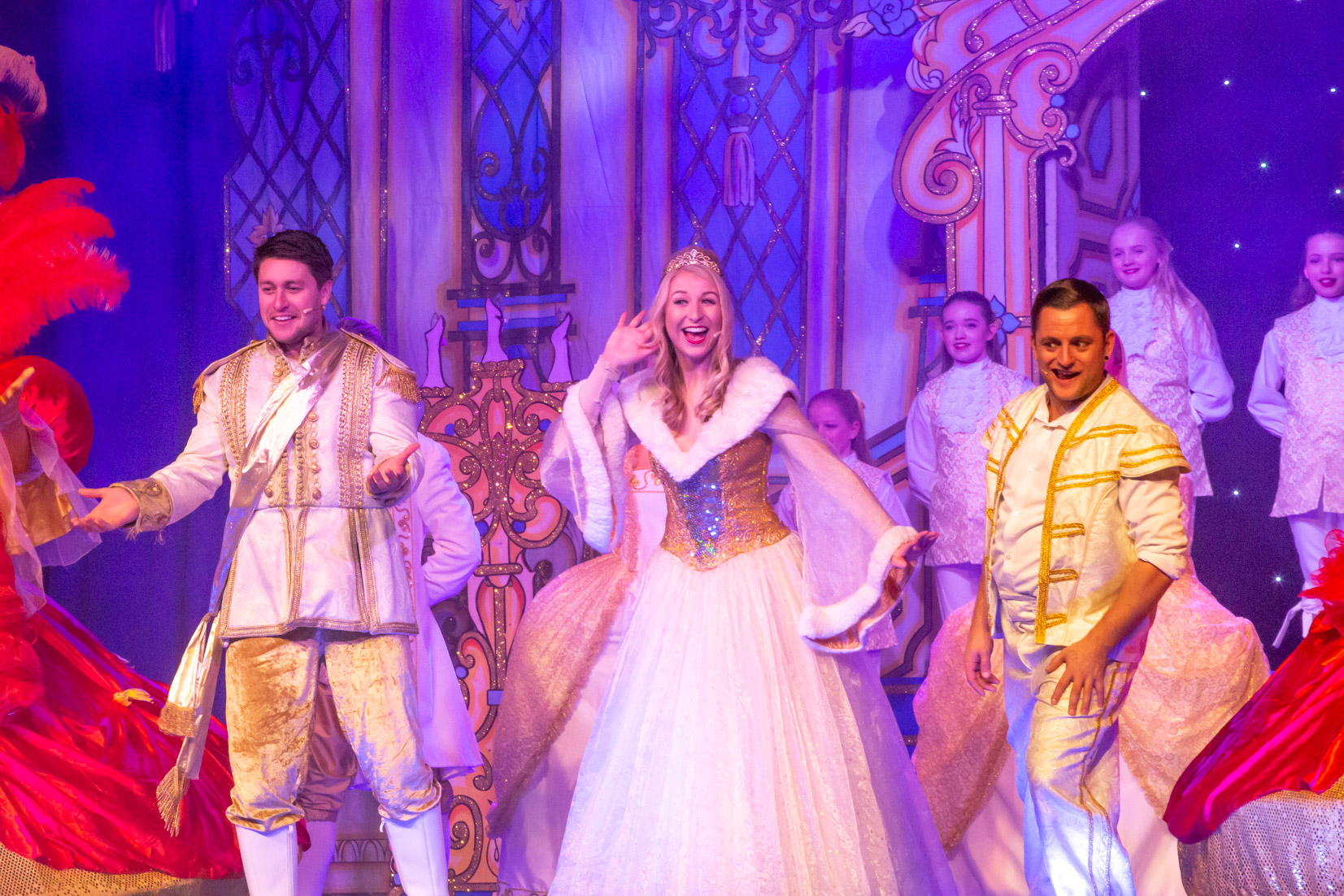 The 2018-19 production of Cinderella at The Place, Telford

“We’ve been inundated on the coast, so we’ve tended to try to get away from it. As people have headed for the sea, we’ve driven inland.”

Given the rave reviews he receives every year for his performances at Theatre Severn – and the fact that he is acknowledged as one of the country’s top pantomime dames – it is interesting to note that Brad’s primary theatrical career is stage management.

“I stumbled into acting. I’m not a trained actor,” he says . . . “which becomes fairly obvious when you see me on stage in Shrewsbury,” he adds with a dry chuckle and the perfect timing with which he delivers so many of his classic throwaway lines on stage.

He was working on a production of JB Priestley’s An Inspector Calls in Cambridge when the country went into lockdown in March.

“A great deal of planning goes into putting on a pantomime and you couldn’t put in months of work for something that might not happen. More than anything, the welfare of our audiences and staff was paramount.”

“Initially, we thought life might return to normal within a few weeks but it soon became obvious that was not going to happen and that there was a good chance that the pantomime would not go ahead.”

He said that Evolution Pantomimes, which produces the Shrewsbury shows, and Theatre Severn had not taken this decision to postpone this year’s run lightly and held off a decision for as long as they could, but ultimately the uncertainty around restrictions had given them no choice.

“The numbers just don’t add up,” Brad explains. “There is such a big financial outlay on a production before you can start to bring any money in through ticket sales. There is some theatre going on but it is very tough to make it work. We saw an end-of-pier variety show recently where they were allowed 100 people in for 600 seats, to ensure social distancing. I just don’t know how you make any money like that.”

Meanwhile, Brad is determined that one thing won’t change for him this year. He explains, “I’ve spent every year for the past decade in Shrewsbury from mid-November to early January. I can’t imagine not going there for the run up to Christmas . . . so I’m sure I shall. I’m sure we’ll go over and spend a few days doing something.” 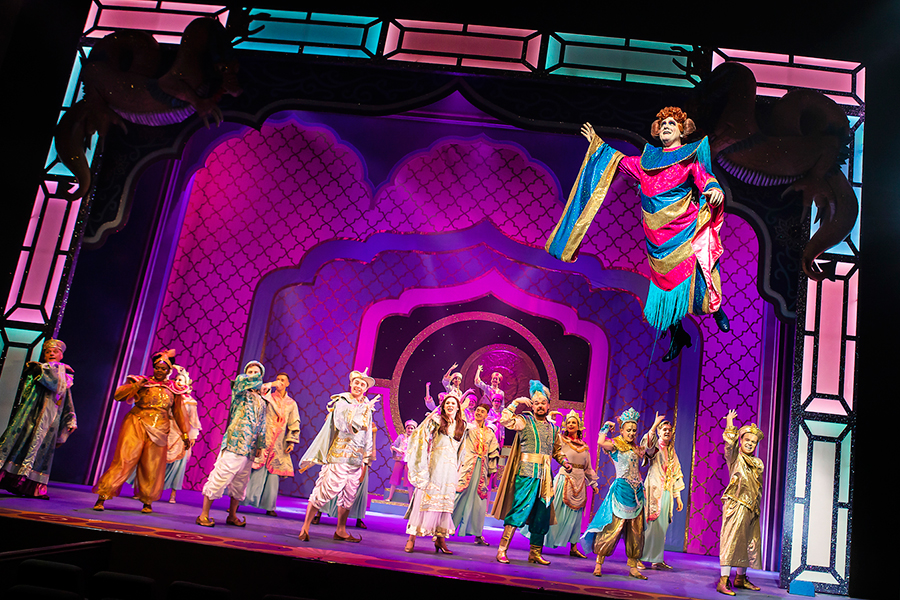 The pantomime crisis is intensified by that fact theatres up and down the land rely on their winter programme to ensure their commercial viability. For instance, more than 40,000 people see Theatre Severn’s pantomime every year, making a huge contribution to the venue’s finances.

It is a similar story at The Place at Telford, where more than 22,000 tickets would have been sold for this year’s production of Aladdin, which has now been put back a year.

Theatre manager Debbie King says, “It’s extremely disappointing. The pantomime attracts audiences from all backgrounds and across the generations who come to have fun at a very special time of year. It is a traditional part of their Christmas celebrations. So much of the joy of pantomime is in audience participation, shouting out, and that wouldn’t be the same with everyone in a mask. 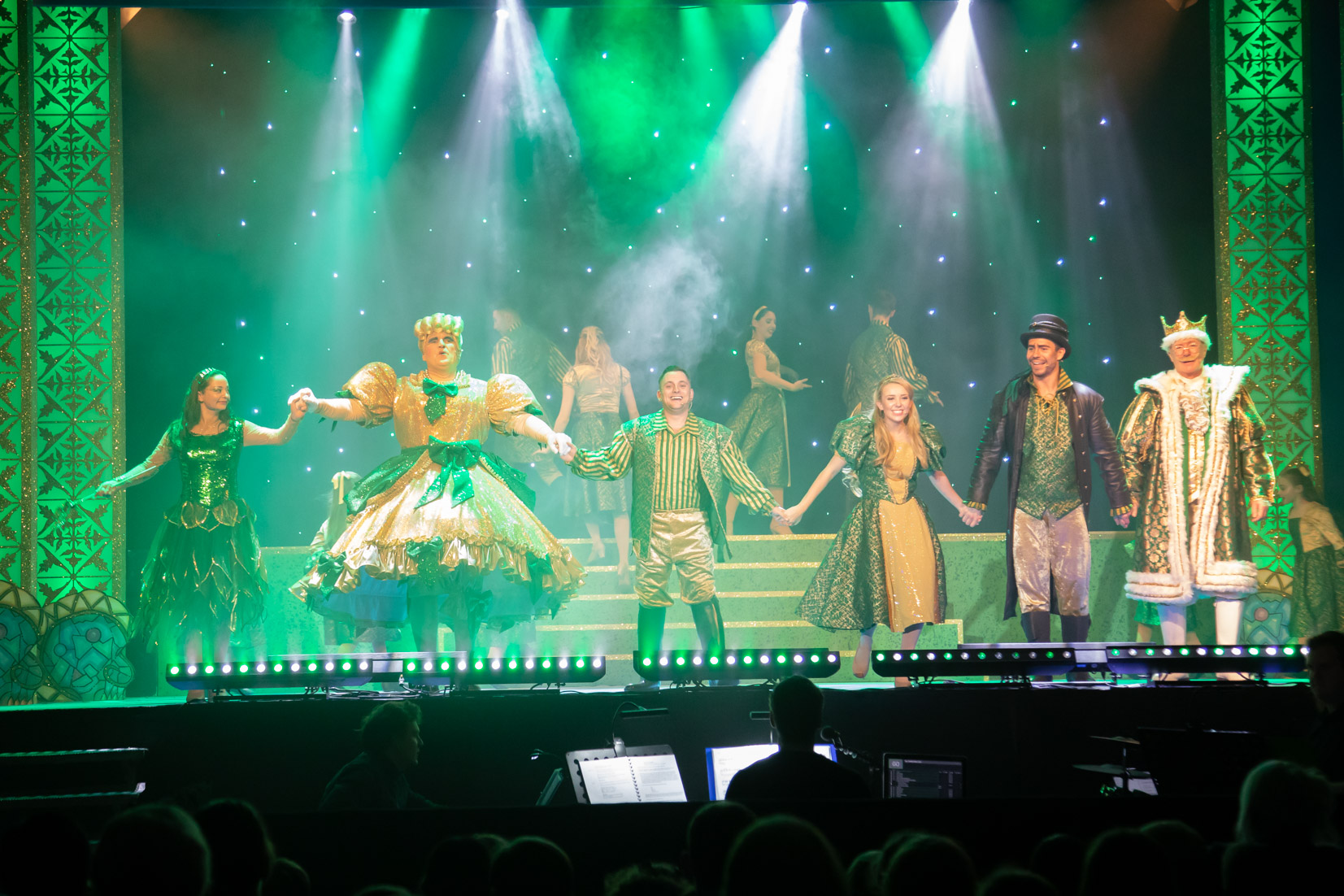 The 2019-20 production of Jack and the Beanstalk at The Place, Telford

“A great deal of planning goes into putting on a pantomime and you couldn’t put in months of work for something that might not happen. More than anything, the welfare of our audiences and staff was paramount.”

Debbie is confident audiences will flock to see Aladdin next year. In the meantime, she has a novel suggestion for those who need their annual panto fix – put on your own show at home.

“Why not act out your own panto amongst the family. Choose your favourite pantomime character and have some fun with it. I’m ‘blue sky’ thinking here, but I’m sure the kids would love it!

And the panto character Debbie would love to be? “An ugly sister. I want the laughs.”

Around 900 people a year watch the nine performances of Broseley’s annual pantomime in late January and early February. Social distancing restrictions would simply make a full scale show in early 2021 unfeasible and any change in guidelines would come too late.

“I’m devastated that my tenth pantomime in my beloved Shropshire has had to be postponed.”

BroADs chairman Mike Bradfield says the society is exploring scaled down alternatives to the panto.

“We do get very good audiences so we are looking at the possibility of doing something, whether that is just readings or something that looks like a panto but isn’t a panto. We’ve already done a performance of Robinson Crusoe on Zoom this year, so perhaps something like that is a possibility.”

One thing that is not in doubt is the future of BroADS, Mike stresses.

“You hear of amateur theatre groups who have folded because of being unable to put on shows this year. We at Broseley intend to carry on and, if restrictions on indoor performances stay in place into next year, we’ll look at a putting on outdoor productions in 2021. BroADS isn’t planning to fizzle out!”

“Initially, we thought life might return to normal within a few weeks but it soon became obvious that was not going to happen and that there was a good chance that the pantomime would not go ahead.”

There may yet, though, be the chance to see a pantomime this season with Theatre on the Steps deferring its decision on Dick Whittington – due to run from January 9 to 30 – pending the government statement in November.

Iain Reddihough, of Theatre on the Steps, says, “We are sitting on it at the moment. Our run starts a little later than many pantos, which often begin in December, giving us 5 or 6 weeks to get it on, if a change in the rules makes it practical. You are generally looking at 2 or 3 weeks of solid rehearsal.

“We always tend to sell out the pantomime so if the guidelines allow, we shall go ahead.”

If it does, with so few shows on elsewhere, there might just be an extra big rush for tickets. 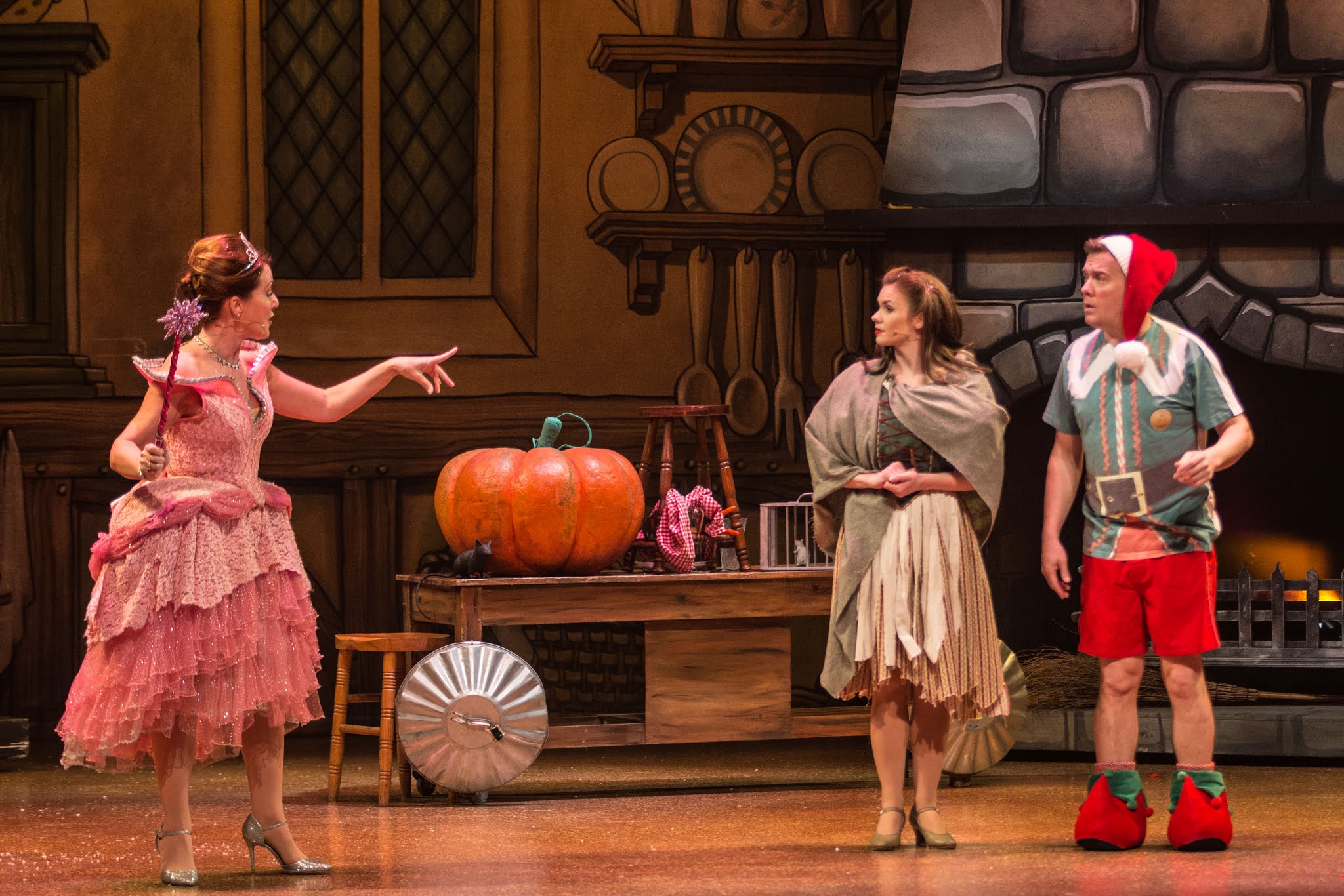 A Bridgnorth initiative launched to help businesses look beyond lockdown is proving successful, with some creative partnerships being formed as a result. Bridgnorth-based consultancy Good2Great

Some of the world’s leading acoustic guitar players are joining a Shropshire-based musician for a series of online courses and live workshops. The world-class guitarists,

People who have gone above and beyond during the pandemic will be recognised in a special award ceremony this spring. Great Dawley Town Council has

On Wednesday, March 3 it is World Hearing Day, and local charity, Signal, is challenging Shropshire to a sponsored 1 hour silence. The challenge is